Growing up in Mt. Pleasant, Michigan meant I lived in the flat lands, but my parents were teachers so we had the summers off to camp. I loved rustic camping, especially in the UP, and still do. The more rustic the campsite and the fewer people around, the better!

I met Eric ten years ago at Festival on the Bay and one of the things that attracted me to him was his love of the outdoors. We share the same mindset for camping – more remote the spot, the better. 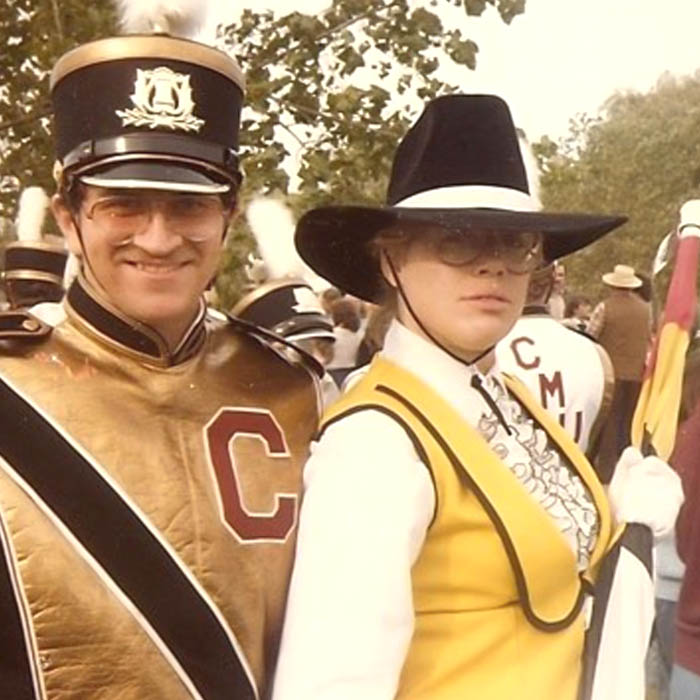 When I found my calling

I grew up in a musical family and thought being a music teacher was my calling. After two years as a music major at CMU, I knew being a band director like my dear Dad was not for me.

Many years later, I found my love of web design while employed at CMU as a marketing assistant. I took advantage of college classes for employees, learned HTML, and took over the School of Music website. Boom, I found my destiny!

Years later, I had a fun job as a website / graphic designer for Abacus Publishing in Grand Rapids. I ended up in Petoskey (with my now-ex) where there were no jobs in web or graphic design. I was not in love with Petoskey… yet.

Then, I met a woman who shared my dream of owning a web design company and AlphaGeek Web Design was born! We owned the company for 12 years, sold in 2013, and I started Abuzz Creative.

Past Member – Board of Directors

I toured the US and Canada with the Phantom Regiment Drum and Bugle Corps as a member of the color guard. Our first tour took us from our home base of Rockford, Illinois to western states, including Arkansas, Louisiana, Texas, Colorado, Nebraska and Missouri. Our second tour headed east to Ohio, Pennsylvania, New York, New Jersey, and Massachusetts. Our final stop was in Montreal for DCI World Finals with our last performance in the Olympic Stadium. We took 4th in the World at finals.

I’ve had the good fortune to camp all over the US and Canada with my family and my friends. Our favorite place to camp each summer was Porcupine Mountain State Park in the rustic overflow campground. Favorite stops – many of which I hope to revisit – have been the Rocky Mountains, Jackson Hole, Yellowstone, all of Montana, Boundary Waters, the coast of Maine, and the north side of Lake Superior in Ontario.

Eric and I have a favorite campsite at Fisherman’s Island State Park which we reserve twice a year. We have also found dispersed camping and hike-in sites by the North Country Trail in the UP. Our campsites need to be near water so our dog Trekker can swim!

During this outbreak, we're all making fewer shopp

Being stuck inside is frustrating and working from

Are you telling your business stories or helping o

Brand voice is the authentic personality of your b